DETROIT – The NTT IndyCar Series weekend of insanity has concluded for the Chevrolet Detroit Grand Prix on Belle Isle with Chip Ganassi Racing’s Scott Dixon crowned the winner of Race 2. 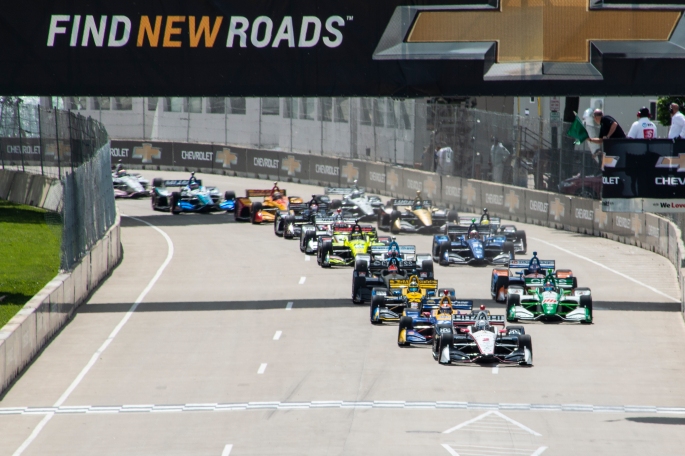 After a dramatic and delayed race yesterday evening and an odd qualifying session this morning, the second of the Dual in Detroit races followed suit in equally dramatic fashion. Beginning with a rough start, Lap 1 incident between Carlin’s Patricio O’Ward, A.J. Foyt’s Tony Kanaan and …. The incident retired Kanaan and the race returned to green on Lap ##, and multiple drivers needed to pit being affected to some degree by the collision.

The cautions continued with contact between Sebastien Bourdais in the Dale Coyne Racing with Vasser-Sullivan car and Ed Carpenter Racing’s Spencer Pigot. The #21 driver was looking to exit the pits while Bourdais nudged the rear-end of his car, launching it into the tire barrier. Pigot retired, and Bourdais was issued a penalty, and need for pitting for a broken front wing.

In what was set up for a dramatic race had the two stayed up front, Team Penske and pole winner for today Josef Newgarden was again leading the helm of competition between himself and Andretti Autosport’s Alexander Rossi. Coming into Lap 33, James Hinchcliffe in his Arrow Schmidt-Peterson Motorsports car was exiting the pits and trying to blend with the two contenders. Newgarden lost the back end of his car, and went into the wall, taking Hinchcliffe and Rossi with him. Rossi was able to pull away without damage, and Hinch was able to continue, with a little assistance. Newgarden retired for 22 laps until the Penske team was able to resurrect his #2 Hitachi car and rejoined the field.

The fun didn’t stop there. Chip Ganassi’s Felix Rosenqvist (Rookie), who seemingly was able to miss a few of those incidents, having driven right past the Newgarden-Hinchcliffe-Rossi incident, ran out of luck on Lap 65. A brush with the wall bent a tow-arm link, and ending his race.

Rosenqvist’s unfortunate out issued a full-course yellow and immediate red flag so the race could be restarted and completed under green. This would be one lap of yellow and the remainder green.

Dixon’s win comes as some surprise as the beginning of the race didn’t lend to a promising finish for the #9 car. Dixon was struggling enough Bourdais’ teammate, Rookie Santino Ferrucci was able to pass him with ease. However, he made a triumphant return, and earns his first win of the 2019 season, and his third ever win in Detroit.

Notable mention for P2 finisher Arrow Schmidt Peterson Motorsports Rookie Marcus Ericsson. The driver, formally in the Formula 1 series and new to IndyCar , earned his first podium of the series. Ericsson made quite the effort to catch up to Dixon, but Dixon had considerably more Push-to-Pass to utilize, especially in the restart following the red flag.

Newgarden, although down multiple laps at the end of the second race in Detroit, remains the points leader in the series with Rossi 15 points behind in the championship.

*Updated to include results from today’s race 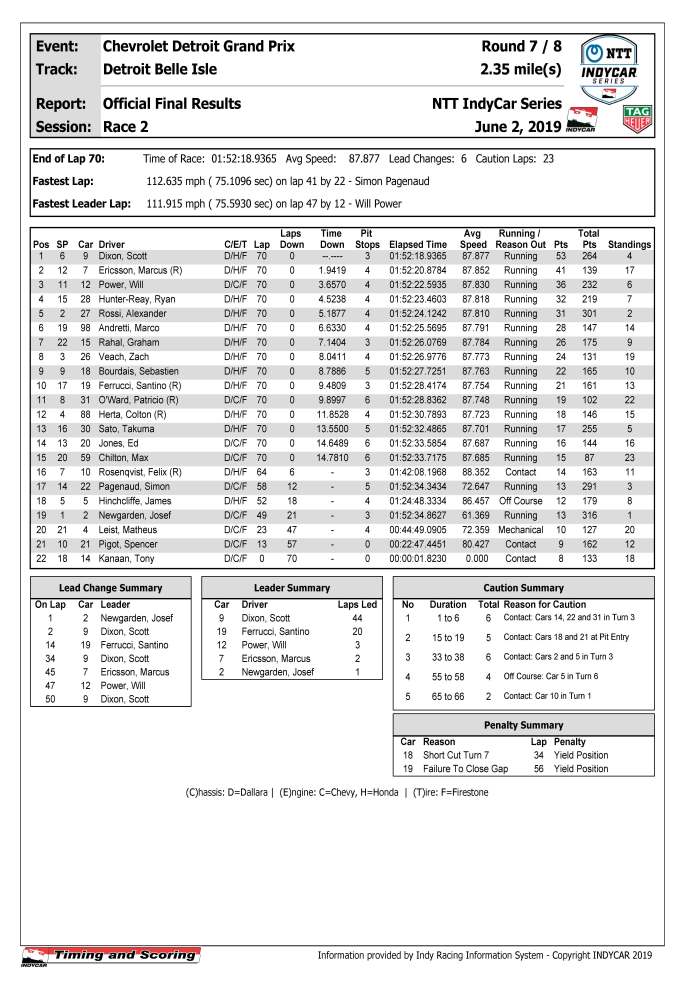