*Note: I originally titled this “Young blood fills the podium for Toronto,” which is not actually incorrect, but the way it was phrased is rather disgusting. And I owe to you readers, a more effort-given title, whether or not it gets your attention in a pleasant manner.

*Second note: Every time you read “Honda” in this article, I had accidentally typed it originally as “Hondy.” Honda-Indy. Hondy. Makes sense.

Sunday was a young podium for the Honda Indy Toronto race in our wonderful northern neighbor, Canada. At the end of the 85-lap race, it was the Penske American driver Josef Newgarden who nabbed the win, with the American Andretti-Herta Alexander Rossi for 2nd and our favorite Canadian, Schmidt-Petersen’s James Hinchcliffe for 3rd.

Newgarden’s win was his second of the season, his first happened back at Skip Barber in Alabama. Sunday he would lead 58 of the 85 laps total, but it was his teammate, Helio Castroneves that would hold onto the lead for those first 24 laps of the race. A chance caution and pitting situation would set Newgarden up for quite the impressive finish, but we’ll touch more on that here in a few.

Let’s rewind back to the first caution, on the very first lap and turn of the race.

The unfortunate part of this was this particular incident (reminiscent of Sunday’s early British F1 race…) was between the pole-winner Penske’s Will Power, and Ganassi’s Scott Dixon, who currently holds the lead in the championship. On the start, Castroneves would get around the crashing duo to grab that leading spot mentioned previously. As he took off with the lead, Power and Dixon would clash–landing Power in the tire barrier after making contact with Dixon’s left-rear tire.

Dixon was able to make it back to the pit lane for repairs to his tire and made it back out into the race. (He would be penalized with a drive through though for his repairs in the pit lane.)

Power was removed from the barrier by the Homaltro Safety Team and was able to limp around the track with a severely canted tire along with wing damage. However the damage was enough that he could no longer turn, and was forced to stop (by the car) along the wall entering pit lane.

The #12 team had to run out and cart the car back to his pit box at the end (exit) of pit lane, where they would find the damage was too extensive to repair in the pit. The car and team would head to the garage, where the car would stay for the duration of the race, having sustained too much damage.

Dixon managed a much better end to his first lap soiree and finishes 10th, keeping him only 3 points ahead of Castroneves in the championship.

Now back to the second caution.

Ganassi’s Tony Kanaan goes to pit on Lap 23 for fresh tires, as many of the cars began to on a three stop strategy. As he exits pit lane, he misses the turn with his cold tires and lands himself in the barrier Power was pulled out of just a handful of laps prior.

As TK is found in the barrier and a yellow caution is issued, Newgarden finds himself finishing up a pit stop as the pits close. He was there long enough for race control to not issue any warnings or penalties, and it turned out in his favor.

The pits would open on the next round and the entire field would need to pit, aside from Newgarden, giving him his lead. He would only lose that lead for 3 laps (Laps 54-56) when he would pit and Ganassi’s Max Chilton, along with another Penske teammate, Simon Pagenaud, would share leads before pitting as well. Newgarden regained his lead on Lap 57 and held it for the rest of the race.

There were a lot of Andretti cars in the top 10, which was odd considering their luck and finishes the last few races. Rossi finished on the podium, and the Andretti to finish was Marco Andretti, in 4th.

Read that one more time: Marco Andretti finished 4th. A Top-5 finish. Not a fluke.

Listen, I hate to rag on him as I am and have been an Andretti fan my entire existence. But usually when you watch a race and see him anywhere in the top 10, let alone the top 5, you ask yourself if you’re watching the pit cycles happen and know the field will return to its normal self once everyone makes their way through pitting.

But that wasn’t the case this week. He actually made it up there, made some progress and held his spot.

Now, do we get our hopes up for more movement like this? I don’t recommend it. But how great would that be if he and Herta finally found his sweet spot?

Teammate Ryan Hunter-Reay was the other fighter in the Top-10, and although he didn’t have a podium finish, it was a nice change of pace compared to his string of engine failures and unfortunate incidences of late.

Rossi also welcomed a finally, well-deserved change in luck and podium finish, as we’ve watched him get so close on multiple occasions this season (*cough* Long Beach *cough*), but things like “incidents,” engine failures and other obstacles continue to thwart his efforts of which we know and see should have been podium finishes.

Newgarden was a nice face to see on podium, getting his second win in Toronto. It was nice to see yet another American driver join him for the podium, and finally getting his first podium since his first IndyCar win at the Indy 500 as a rookie last year (2016). And of course, it wouldn’t be a race in Toronto without seeing our favorite Canadian grace the podium. And we know Hinch has had one roller-coaster of a season as well. He deserved a win at home of all places. A podium is just as well.

And now for a steady break, yet again until Indy returns at Mid-Ohio for the Honda Indy 200 on July 30th.

Btw–did you ever notice the Toronto course is sorta shaped like a dinosaur?
(See below.) 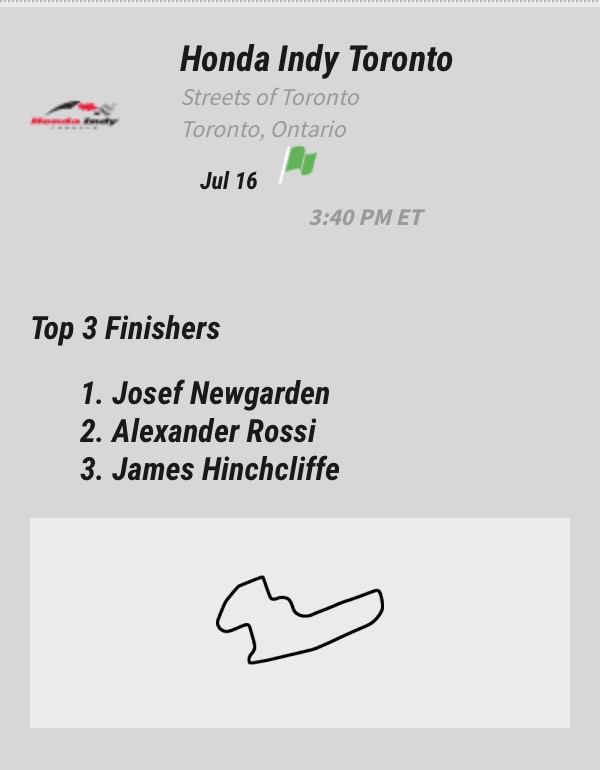 Corrections: Edited 7/19/2017 to reflect that Scott Dixon finished 10th in the story, not 8th as previously stated.