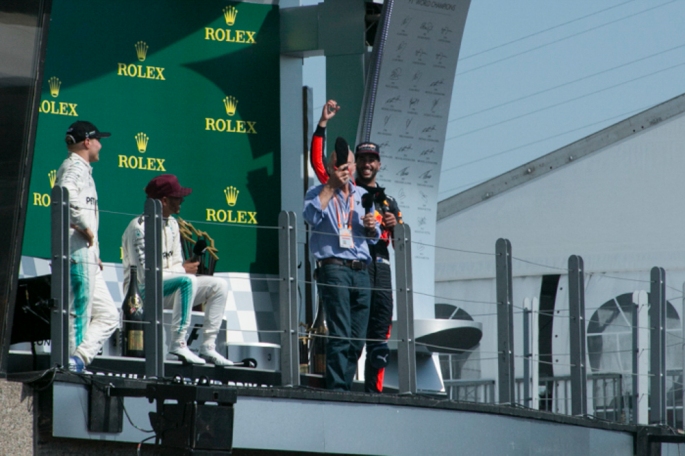 What looked like a would-be power struggle for Mercedes front-runner Lewis Hamilton going into the Canadian Grand Prix weekend turned into an incredibly dominant qualifying and race for the three-time World Champion. Winning the pole on Saturday gave Hamilton his 65th career pole, as well as tied him with most overall poles with the legendary Aryton Senna. Hamilton then took the same edge and determination from Qualifying to Sunday’s race to win the fight to take home his 6th Canadian Grand Prix win.

And although Hamilton’s drive was reminiscent of his drives last year with a strong start giving him the lead and what appeared to be leisurely stroll around the Circuit Gilles Villeneuve, the race didn’t fail to keep you questioning what all was happening on track, while also giving Hamilton a way to catch up in points with the current points-leader, Ferrari’s Sebastian Vettel.

While Mercedes owned the race this weekend, Ferrari, who many thought would continue to pull ahead with podium wins like in the previous races this season, looked to be struggling. Vettel and Kimi Raikkonen tend to stay quite ahead in at least the top five positions during a race this season, while maybe losing a few positions during pit stops.  But Montreal was not the case. Perhaps it was the brake problems they were experiencing, but the two drivers, having finished 4th and 7th respectively were rarely seen in the top five.

Vettel’s added struggle was due to front wing damaged suffered after a spot with Max Verstappen in that first lap and a required pit to replace the damaged wing. He then came out 18th and worked his way to a fourth place finish. Now that was an impressive run, but you can’t help but wonder what would have happened had he not needed to pit for the damage.

The real surprise of the day, and the actual persistent presence in the top five was the Sahara Force India team, with both Sergio Perez and Esteban Ocon both holding on tightly, together to their top five positions for nearly 22 laps. The “Pink Panthers” managed to keep Ferrari separated from the podium for the last half of the race.

This was all coming from a team that not too long ago was struggling to find funding to be able to take their cars to the United States for the Circuit of the America’s race in Texas.

Instead, they managed through Perez’s resisted team orders to stay right behind Red Bull’s Daniel Ricciardo and challenge him on a few laps, while holding off Ferrari until Vettel finally made a push in the last couple of laps to take 4th.

These two, Perez and Ocon, have been insanely impressive in their drives this year. A team often overlooked is now dominating teams that usually hold more wins and prestige, like McLaren and Renault, while also gaining the ability to challenge Red Bull and Ferrari. Where did this come from? A combination of the right drivers and the Mercedes-backed engines have a lot to do with it.  Ocon also made it to 2nd for a bit before falling back to Mercedes and Red Bull.

Red Bull could have potentially had another driver on the podium Sunday had it not been for battery issues. Verstappen found himself retired before completing 10 laps of the race due to car dying on him. The young driver was holding on to second quite well until that point, which then left Ricciardo to try and make something of it, which he very well did.

McLaren looked as if they would finally, finally get the sweet taste of a finish with added (and their first!) points as Fernando Alonso was in the top 10 before engine failure (no surprise there) took hold and retired him from the grand prix on lap 67 of 70.  And at one point earlier in the race, the Spanish driver was in fourth position–something we had yet to see a McLaren driver reach this season.

Alonso (and McLaren) has had incredible patience dealing with the Honda situation. Alonso, in his first race back since he skipped Monaco to race at the Indianapolis 500 race, where he also suffered yet another Honda engine failure with 20 laps to go, faced another retirement in the last stages with finishing just out of his grasp.

Alonso did manage to jump into the crowd though and enjoy the cheers, love and welcoming embrace of the fans. He most definitely needed something cheerful after that struggle of a day.

His teammate, Stoffel Vandoorne also had what was for McLaren a successful drive. He did not finish in the points, but at least finished the race. And the team still has yet to score a single point in the driver standings.

And it’s sad that we continually have to state, “well, at least McLaren finished a race.”

Canadian-native and Williams driver Lance Stroll finally got his first points of the season at his home grand prix. It’s a fantastic way to get the season started for the young and struggling rookie. This season has been rough as Stroll continually faces bouts of bad luck or his enthusiasm takes him out early in the game.

So the podium was a Mercedes-Mercedes-Red Bull–with Ferrari close behind in fourth. Lewis Hamilton, Valtteri Bottas and Daniel Ricciardo.

Well done guys. It was a good show.